Top Posts
7 Steps To Turn Your PASSION Into An...
Email Marketing for Financial Advisors: Best Practices for...
5 Things Every Internet Marketing Millionaires Do
40 Productivity Tools to Add More Hours to...
Keyword Research: The Best Kept Keyword Research Secrets...
How to Close More Clients For Your Services
What is a Sales Funnel and What are...
How To Successfully Do A Product Launch Formula
How To Sell Products On Autopilot
How to Become a Super Affiliate
How To Use Email Autoresponder To Accelerate Business...
Top 27 Website-damaging SEO Mistakes in 2020 and...
How to Write SEO Title Tags: The Correct...
18 Money Making Ideas Using Digital Marketing. Which...
Business and MoneyE-books 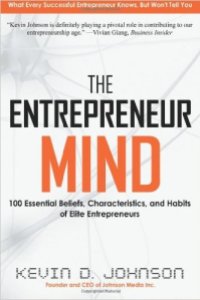 “To be an entrepreneur is to think differently. While most people seek refuge, entrepreneurs take risks” – Kevin D. Johnson.

To achieve unimaginable business success and financial wealth—to reach the upper echelons of entrepreneurs, where you’ll find Mark Zuckerberg of Facebook, Sara Blakely of Spanx, Mark Pincus of Zynga, Kevin Plank of Under Armour, and many others—you have to change the way you think. In other words, you must develop the Entrepreneur Mind, a way of thinking that comes from learning the vital lessons of the best entrepreneurs.

In a praiseworthy effort to distill some of the most important lessons of entrepreneurship, Kevin D. Johnson, president of multimillion-dollar company Johnson Media Inc. and a serial entrepreneur for several years, shares the essential beliefs, characteristics, and habits of elite entrepreneurs.

The biggest misconceptions about entrepreneurship is this idea that you need money to make money. The younger generation has done a good job at proving that that is not the case.Through the conviction of his own personal experiences, which include a life-changing visit to Harvard Business School, and the compelling stories of modern-day business tycoons, Johnson transforms an oftentimes complex topic into a lucid and accessible one.

Failing to reach your potential is a lesser-known, lesser-understood type of business failure: Entrepreneurs fail to think big because they are limited by their environment or their lack of expertise, or they lack the motivation or self-confidence. Doing lots of operations work leads to early burnout. You should hire key employees so you can spend your time making plans for growth.

Being successful is not the goal: Entrepreneurs should be motivated by creating a valuable product for customers, not success itself. The feeling of success is fleeting after each accomplishment.

It’s never too late to be an entrepreneur: In fact, older people are starting more businesses than those in their teens and twenties. But the media tends to focus on young tech entrepreneurs.

Following your passion is bogus: Not all passions can be monetized, there are other reasons for starting a business, and businesses actually come with lots of drudgery.

Don’t hold grudges: Customers or investors who say no may have the opportunity to say yes in the future; don’t alienate them with anger or disrespect.

You aren’t always the best person to close a deal: People don’t always make decisions based on logic, so the same pitch from different people can have different results. Study your potential customers and, based on that, choose the right person to represent your company.

Do what’s most important first: Successful entrepreneurs prioritize the important tasks, even though they are harder and take longer. Increase your motivation and focus by working in the morning, taking a break, changing your environment, and disconnecting from the web.

Build a company that is systems-dependent, not people-dependent: Map out all the roles in your company, from CEO to CFO, even if you’re doing most of them. That way, you can automate processes, make things more efficient, and be ready to hire.

Spend the majority of your time with people smarter than you: You will pick up their habits and thoughts, and learn from them.

You don’t always have to be the smartest one in the room: The best CEOs are humble and know how to bring together smart people.

In this riveting book written for new and veteran entrepreneurs, Johnson identifies one hundred key lessons that every entrepreneur must learn in seven areas: Strategy, Education, People, Finance, Marketing and Sales, Leadership, and Motivation. Lessons include how to think big, who makes the best business partners, what captivates investors, when to abandon a business idea, where to avoid opening a business bank account, and why too much formal education can hinder your entrepreneurial growth.

This book covers every aspect of being an entrepreneur in seven chapters: strategy, education, people, finance, marketing and sales, leadership, and motivation.Smart and insightful, The Entrepreneur Mind: 100 Essential Beliefs, Characteristics, and Habits of Elite Entrepreneurs is the ultimate primer on how to think like an entrepreneur.

Kevin D. Johnson, president of Johnson Media Inc. and a serial entrepreneur, has several years of experience leading his multimillion-dollar marketing and communications company that now serves many of the most notable Fortune 100 businesses. As an innovative leader, he has appeared on ABC’s Good Morning America, CBS, Oprah Radio, and in The New York Times and The Wall Street Journal. Moreover, he has appeared on CNN frequently.

Before founding his company in 2000, he engineered web applications and produced computer software for leading companies. He was a software programmer for IBM and a webmaster for CNN Interactive. He also worked for Arthur Andersen Worldwide as a business consultant and software developer.

Hailing from Boston, Massachusetts, Kevin attended Morehouse College in Atlanta, Georgia, where he studied computer science as a NASA scholar and Spanish, graduating with honors. While in college, he started Johnson Media Inc., which in 2000 created one of the first online content management systems, called OmniPublisher. He later sold it to a publishing company, earning the distinction as a social media pioneer. Realizing the tremendous opportunity in applying Internet technologies to media and marketing, he decided to focus his business on this growing market.

Recently, Kevin was the director of economic gardening for the Technology Association of Georgia (TAG), one of the nation’s largest nonprofit trade organizations for technology. In this role, he was responsible for leading an innovative approach to economic development that focused on providing resources to high-tech businesses located in Georgia’s coastal region.

In his spare time, Kevin enjoys listening to salsa and jazz, playing piano in his Latin band, reading, golfing, traveling, and running half marathons. He is a member of the Apex Society, the Young Entrepreneur Council (YEC), and a former board member of the Atlanta Business League (ABL). He lives in Atlanta, Georgia, with his wife and son.

Start with Why: How Great Leaders Inspire Everyone to Take Action

The $100 Startup: Reinvent the Way You Make a Living, Do What You Love, and Create a New Future

How to Start a Business or Career in...

9 Types of Digital Marketing that Get Results....

The Age Old Question Do You Need A...

Are You Paying Attention to Your NOT TO...

CUSTOMER LIFE-CYCLE MANAGEMENT. HOW TO KEEP THEM ENGAGED?

MAKE YOUR BUSINESS WORK FOR YOU (THE POWER...

The Industries of the Future

The Art of Explanation: Making your Ideas, Products,...